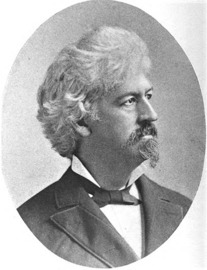 an American lawyer and writer. As a writer, he is particularly known today for his Baron Trump children's novels. However, he wrote other children's novels, as well as the dystopian novel, 1900: or; The Last President, a play, and several non-fiction works.More at Wikipedia if you trust this source. If not your own d.d. is important now more than ever as masses of information are disappearing from the internet at rocketspeed.

Bail Bonds for Biden's? Not Likely Given Gallows In The Square